Our experienced engineers will make sure your VPS hosting service is at its top performance. We’ll tailor the server to your needs and install any mandatory software. You needn’t worry if you had no prior experience maintaining a website, we’ll do everything necessary for you, free of charge.

We’ll optimally prepare the server and configure the web environment.

We’ll transfer your data from another hosting provider and deploy the backups if necessary.

In case something stops working we’ll find out why and fix it. We’ll walk you through the steps for the same to not occur again, and offer our full assistance setting up additional software you may need. If you need customized software, we will provide you detailed installation instructions, or install it for you.

We'll install an operating system, additional server software and a CMS for you. Get in touch with the technical support to arrange the time.

We support our customers’ needs to secure their data and protect their websites from intruders. Therefore, we help by setting up protection against DDoS attacks and switch to HTTPS protocol, by installing an SSL certificate, for data encryption.

70% of support requests are solved within 15 minutes
We reply around the clock, 7 days a week 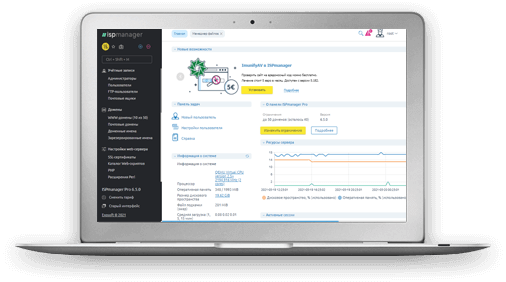 Enjoy your VPS experience with the ISPmanager control panel, even if you’re a beginner.

Everything you need is available straight from the browser window: user and domain management, mail setup, backups creation, file upload, DNS, FTP, PHP, Databases and much more.
Learn more about the control panel

Website antiviruses ImunifyAV (ex. Revisium, enabled in ISPmanager by default) and Virusdie find and clean malicious code automatically, with no impact on server's efficiency. Easy to activate and set up in the ISPmanager control panel. Moduls do not restrict the amount of checked websites. How to activate the antivirus?

Excellent performance
VPS servers are deployed on Intel and AMD processor base. These servers are hosted in our data centers. As the equipment is depreciated, it is replaced with a new one.
VPS DDoS protection
Enable DDoS protection on the configuration page. You will get a 95% protection guarantee against network-level DDoS attacks.
Expert technical support
Get in touch with our technical support team available 24/7 with any questions you may have, free of charge. We offer fully managed VPS servers.

Our hosting services are rendered strictly in accordance to the Terms of Service.
We guarantee a refund set by the SLA.

How to Choose a VPS That Would Suit Your Business' Needs?

We are offering you four ready-made VPS plans and a possibility to customize the three main hardware parameters of your virtual server: number of processor cores, amount of RAM, disk size, and also add a network channel with protection against DDoS attacks. All the VPS come equipped with high-performance Intel Xeon processors, designed specifically for industrial servers and able to work in dual-processor motherboards.

Single-core processors are used for simple tasks, such as storage of files, antivirus functionality or of a not so busy mail server, hosting a company’s site that will be visited by a maximum of 1000 users per day and that will not transmit video or audio streams.

1 GB of RAM will hardly allow for high-perfomance of an 1С server, SQL server, or other database servers. Also, this VPS plan will not suffice for highly-loaded development and design environments, online games, CRM systems, and other network applications of medium and high resource intensity.

The VPS plan will be ideal for small companies (up to 10 employees) , individual divisions of big companies, or for performing certain non resource-intensive tasks of large organizations.

Two processor cores combined with 2 GB of RAM will allow for server tasks such as storage of files, antivirus and complex firewall functionalty, of the mail and web servers, hosting a company’s site visited by less than 5000 users per day, which can transmit video and audio streams short in duration.

2 GB of RAM allow for stable work of a small mail server, an InterBase-level or FireBird-level database server, internal CRM systems for about 100-150 users.

100 GB of disk size will suffice for storage of a bookkeeping database or several web sites (up to 5 average-sized ones without sizeable video and audio files).

This VPS hosting plan is recommended for small firms (an event agency, a dressmaking and tailoring establishment, a tutoring center, or a network of service stations) or individual divisions of larger organizations (up to 50 persons), for solving such tasks as storage of documents, using office programs, for example MS Project, bookkeeping, account keeping, or site hosting.

Triple-core processors with 4 GB of RAM are powerful enough to perform moderately complex tasks. A company’s web site visited by 10,000 users per day and storing images/videos, a file server, a mail server for 50 mail boxes, a small Framework, for example PHP or 1С for 5-10 users, may well work on this server.

This VPS hosting plan is suitable for the tasks of small businesses, various retail networks (5-10 stores), small online stores, or medium-sized real estate agencies, provided that the size of the real estate database does not exceed 10 GB. Such a server can allow for a small group of software developers (10-15 persons), an accounting department, a personnel department, and other administrative units of a firm.

This configuration of a virtual VPS server corresponds to that of a high performance dedicated server, which, along with the excellent performance of the mail servers and web servers, will provide for perfect operation of all kinds of bookkeeping software, design tools for business processes, and distributed databases. Transmitting video and audio streams is possible, provided that the disk size allows for storing the required amount of media files.

Four-core processors with 8 GB of RAM are suitable for functioning of corporate portals (MS Sharepoint, for example), of web sites with workload of more than 50,000 users per day, of MS SQL Server-level database servers.

This VPS hosting will suit practically any small business enterprise, provided that the disk space meets the requirements of the stored amounts of data, or is increased.

If the bundle configurations we are offering do not satisfy the requirements for your virtual server, you can customize the parameters of the processor, memory, and disk size by yourself. The processor frequency remains set to 2.4 GHz, and will not affect the server performance for the worse in any way.

Number of cores and RAM

Increasing the number of cores in itself does not give any advantage in server performance and speed, but it makes sense along with increasing of the RAM amount. The processor cores are responsible for simultaneous processing of task streams, that is, in case of a single-core processor the tasks will line up in one sequential queue, two cores will divide the queue in two and perform the tasks in parallel with one another; three, four and more will improve the system's performance respectively due to increasing the number of tasks performed simultaneously. If the processor, under a low amount of RAM, works with a big number of cores, the execution time for parallel tasks will not be able to decrease because of lack of memory for their execution. Besides that, not all of the software is optimized for working with multi-core processors, that is, additional cores do not affect the work of such applications.

Processors with 2-4 cores should be chosen for the functioning of small server applications, mail servers and web servers, or small CRM systems in companies. Such processors work efficiently in combination with RAM size of 4-8 GB.

4-6 cores of a processor are used to perform server applications that are rather resource-intensive, such as large database servers and CRM systems, corporate portals with more than 50,000 users, bookkeeping software with large databases, applications for intensive document flow of large companies, or online video games.

For such a number of processor cores, RAM size of 10-20 GB is required.

Processors with 6-8 cores can perform such complicated tasks on the server as making the work of several web servers possible, or of several database servers, a MS Exchange-level mail server, any bookkeeping software, web sites and portals with media transmission. For such processors to work efficiently, the RAM size must be at least 15 GB.

The storage drive size must not only correspond to the actual and potential amounts of the stored files, but also provide for running the operating system and functioning of the other services. If you are planning to use Unix-like systems and MySQL-level or PHP-level servers, the storage space can be of smaller size, up to 200 GB.

To ensure proper operation of the server in situations with more resource-intensive software and storage of more or less large amount of data, the hard disk size must be 200 GB and more.

Choose a tariff plan suitable to your needs
Clicking “Order” will redirect you to the client area for registration and purchase.
Once you pay for the service, access details to VPS will be emailed to you.
Order now

What is a VPS?

A Virtual private server (VPS) is a fully functional system running in a multi-tenant environment. In terms of management, a VPS is much similar to a traditional server. Administrator of the virtual server has root permissions to manage the entire system, except its hardware.

Why should I use KVM virtualization?

KVM virtualization allows the allocation of OS kernel to each VPS, so that a virtual private server fully simulates the performance of a typical physical server. It has all parameters that a real computer has, such as CPU, RAM, disk space, operating system, root-admin and any number of users. The only thing that the virtual server doesn’t have is its hardware.

What software can be installed on a VPS?

You can install the following operating system on your VPS: Ubuntu, Debian, CentOS, AlmaLinux, FreeBSD, Windows Server 2019, 2022. If you want to install another OS, which is not included into this list, we can discuss it. Please note, software programs that you install on your server will occupy the hard disk space. You can easily resize your KVM disk by submitting a ticket to our Technical support.

What is the difference between VPS server and cloud hosting?

A VPS doesn’t have limitations, which are common to shared hosting. You may host any number of web-sites, databases, domains, various users, and what not. Each virtual private server has its unique IP address, or it may be assigned multiple IP addresses if needed. A VPS server is limited by physical resources, such as RAM, CPU, however the resources are guaranteed to be available, unlike on shared hosting. With KVM technology neither you nor your clients will notice any RAM and CPU limits.

How are bandwidth charges calculated?

Strength of a DDoS attack is not taken into account. We bill only “white” bandwidth generated by visitors of your site. During the day we measure channel speed of your server. Both incoming and outgoing traffic is calculated. The top 5% of the traffic is cut off, and the remaining amount becomes the billable use for the current day. Example: on the 1st of May your bandwidth was 5 Mbit/s. Overage is 4 Mbit/s (1 Mbit/s is included into your tariff plan). The next day you will be charged for 4 Mbit/s per day. Thus, on the 2nd of May you will be charged 4*8 / 31 = 1,03 eur. 4 Mbit/s – resource overage 8 eur – the cost of 1 Mbit/s per month 31 – number of days in May Even if your website traffic suddenly increases, you won’t have to overpay for the whole month. You pay only for “peak use”. Pay only for what you use!